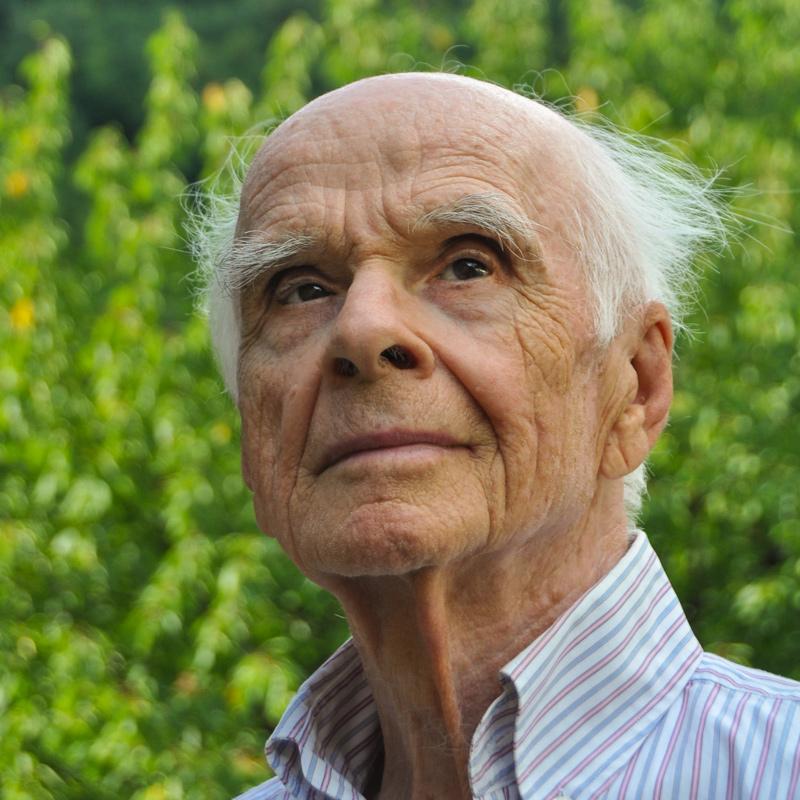 Ervin Laszlo was born in Hungary and became a child musical prodigy.  In his early life he pursued a career as an accomplished concert pianist, but came to realize that this was not the purpose of his life.  With the support of a benevolent community of friends and family, his other talents as a scholar and teacher came to the fore and he moved to a life of academic research and teaching and public service.

Laszlo received the Sorbonne’s highest degree, the Doctorat des Lettres et Sciences Humaines in 1970. Shifting to the life of a scientist and humanist, he lectured at various U.S. Universities including Yale and Princeton. Following his work on modeling the future evolution of world order at Princeton, he was asked to produce a report for the Club of Rome, of which he was a member. In the late 70s and early 80s, Laszlo ran global projects at the United Nations Institute for Training and Research at the request of the Secretary-General. In the 1990s his research led him to the discovery of the Akashic Field.

Ervin is Founder-Director of the Laszlo Institute of New Paradigm Research (Italy), Founder and President of The Club of Budapest, Fellow of the World Academy of Art and Science, Member of the Hungarian Academy of Science and of the International Academy of Philosophy of Science, Senator of the International Medici Academy, and Editor of the international periodical World Futures: The Journal of New Paradigm Research. He is the recipient of the Goi Peace Prize (2002), the International Mandir of Peace Prize (2005), the Conacreis Holistic Culture Prize (2009), the Ethics Prize of Milan (2014), and the Luxembourg World Peace Prize (2017). Laszlo is Honorary citizen of the City of Buenos Aires and Honorary Professor of the Buenos Aires Institute of Technology and holds Honorary PhD’s from the United States, Canada, Finland, and Hungary. He is the author or co-author of one hundred and one books translated into twenty-four languages. He was nominated for the Nobel Peace Prize in 2004 and 2005.

Ervin Laszlo has lived a long, productive and celebrated life, making extraordinary contributions to understanding the nature of reality and to the meaning and purpose of life.  He has synthesized three powerful streams of knowledge: philosophy, quantum science and systems theory.  All this has brought him to the understanding that the world system created by human beings in their ensemble of social, economic, and political systems has become unstable and in the decade of the 2020s is poised to begin a process of bifurcation—to shift to a new higher order, or to breakdown into chaos and collapse.

His latest book, released in 2022, The Upshift: Wiser Living on Planet Earth is his urgent and personal manifesto to thoughtful and concerned citizens in every country to move the shift in the right direction.  Humanity is facing a doomsday scenario, but there is a way out—not by tinkering with small changes at the margins, but by moving forward and embracing a whole system change.

The reason for hope, Laszlo argues,  is that a system composed of human beings can be influenced by people with evolved consciousness—and it doesn’t have to be everyone on Earth.  “A shift in the mindset of a critical mass can be powerful enough to decide which way the system evolves.”  It won’t come from the top, because that is where the leaders are preoccupied with struggling with the instability.  It will come from the bottom, from the critical mass of concerned citizens around the world who have changed their minds about the way they should act and be in the world—away from the obsolete mindset of seeing everyone and everything as separate and exercising agency to control and conquer, to embracing a mindset of cooperation and harmony fueled by the power of love.

Laszlo offers The Upshift as a handbook for urgent action, as a guide for reshaping life on the planet.  And it is here where his work intersects with the mission and purpose of the Visioneers International Network, which has already begun to identify the leaders of the critical mass, bringing them together and showcasing their stories of human goodness as models for transformational change on the planet towards peace, collaboration, harmony and sustainability.