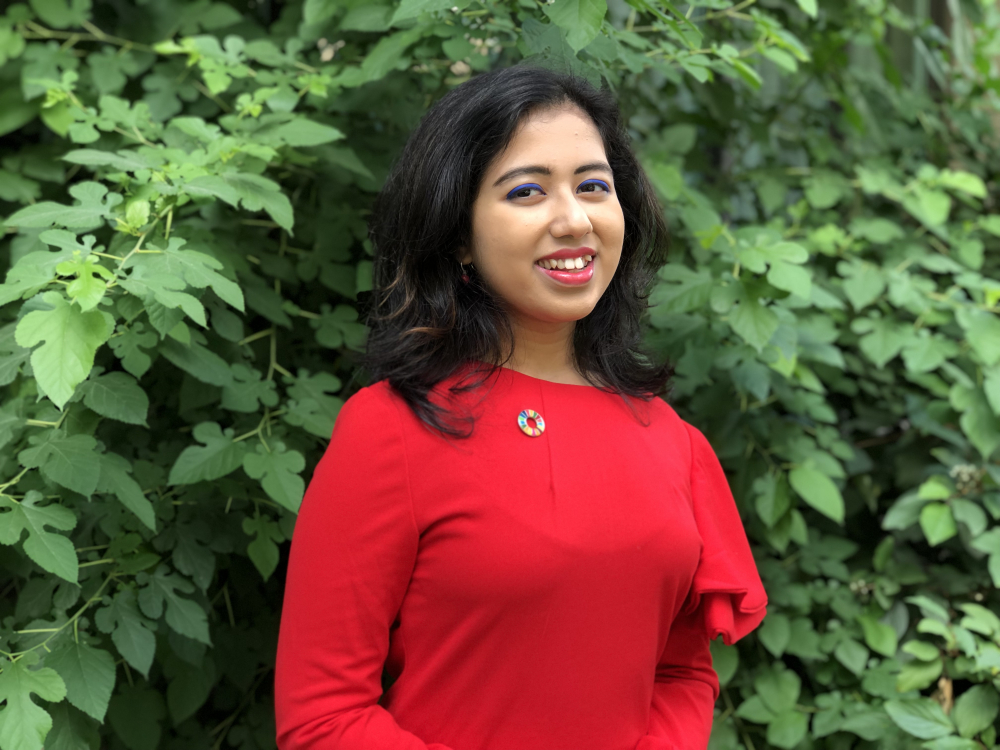 Winner of the International Children’s Peace Prize, 20-year old Toronto resident Kehkashan Basu, has been impacting the global fraternity with her work on peace & disarmament, climate justice, children’s rights, promoting gender equality and social upliftment. Recognised as a Global Sustainable Future Leader, she is one of Canada’s Top25 Women of Influence and a National Geographic Young Explorer. Kehkashan is a powerful voice of future generations in the nuclear disarmament dialogue and spoke at the Parliament of the World’s Religions, the UN75 panel discussion on “A Conversation on Rethinking Disarmament”, the UN High level meeting on nuclear disarmament in 2018, Stanford University’s -“Accelerate Peace” conference and Yale University’s Annual 2019 Graduate Conference on Religion & Ecology. Kehkashan is the founder of social innovation enterprise, Green Hope Foundation (www.greenhopefoundation.com ), whose mission is to eliminate the threat of nuclear annihilation through a process of bottom-up advocacy, by building upwards from a ground level, creating consensus through education amongst all stakeholders, focussing on the inclusivity of children and youth and influencing our leaders to spend public money on education, law & order, infrastructure, healthcare and employment generation and not on armaments and self- destructing industries. Through her advocacy she addresses all aspects of this issue that include non-proliferation, risk-reduction, incremental measures and stronger prohibition measures.

To reach out to all age groups, she uses innovative communication modes of Art, Music and Dance to impart disarmament education to children and youth at her engagement workshops. Till date Green Hope has conducted 155 workshops in 25 countries, that have reached out to 80,000 young people. She has established partnerships with major school boards in Canada and the UAE and uses this platform to conduct awareness workshops. During the current pandemic, her advocacy has gone digital and through zoom webinars she continues to provide platforms of discussion that bring together experts as well as civil society stakeholders to amplify the call for nuclear disarmament. One of her most impactful events during COVID-19 was the International Schools Debate on the theme "Nuclear disarmament is the only route to World Peace" that had a live audience of 600. She composed a song for peace as well as a digital compilation of youth voices with the call to action "We Want Books, Not Nukes". She was a part of the documentary film for the 75th Anniversary Remembrance of Hiroshima/Nagasaki, produced by 4 of the world's largest interfaith organizations.

In addition to her ground-level work, she amplifies youth voices at the highest levels of decision-making. She spoke at the United Nations on the International Day for the Total Elimination of Nuclear Weapons, moderated the Secretary-General's student celebration of International Day of Peace 2019 and performed a peace song at the Culture of Peace celebration at the UN in 2015. She moderated a panel discussion on “UN2020: Enhancing peace, disarmament and the role of women" as well as a webinar on “Lessons from Nagasaki”. She is an active member of the Parliament of World Religion’s “Next -Generation Task Force” and is also working with the CTBTO Youth network. Green Hope is now creating disarmament education toolkits for children and youth.

In recognition of her work on nuclear disarmament, she was awarded the first ever Voices Youth Award in commemoration of the legacy of Mikhail Gorbachev & George Shultz.

In 2013, at the age of 12, she was elected for a 2 year term as UNEP’s (United Nations Environment Programme) Global Coordinator for Children & Youth and a member of its Major Groups Facilitating Committee and she is the youngest person and the first minor, ever, to be elected into this position in the history of UNEP. She is also a United Nations Human Rights Champion for her work on protecting children’s rights and winner of the 2019 “Innovator of the Year” award for her work on Education for Sustainable Development. She has recently been chosen as a 2020 L’Oréal Paris Women of Worth Honouree and featured in National Geographic’s 50th Earth Day anniversary issue as one of the youths saving the planet.

Her internationally acclaimed work on sustainability has resulted in her appointment as the Youth Ambassador of World Future Council - Germany, a Climate Reality Leader, a One Young World Ambassador, Honorary Advisor for the NGO Committee on Sustainable Development – New York, Global Teen Leader at We Are Family Foundation, members of World Oceans Day Global Youth Advisory Council and EarthEcho International Youth Leadership Council. She is also the youngest member of Canada’s Women in Renewable Energy forum and the Council Lead at Toronto-St.Paul’s Constituency Youth Council.

She is a passionate advocate for gender equality and was invited to speak at the European Parliament in Brussels in October2015 during the European Week of the Girl event and at the World Bank’s 2015 Youth Summit in Washington D.C. Rock band U2, at their June’17 concert in Toronto, featured her as one of the incredible women changing the world during their song "Ultraviolet" , including her in a montage of women who have changed the world. She is an ardent advocate for stopping violence against girls and women and a member of World Future Council's Commission on Ending Violence Against Women and Girls. She is a signatory to their petition demanding an end to Female Genital Mutilation and has created her own video to demand protection for girls which she has promoted widely using the social media.

On 20th September 2015, Kehkashan launched her first book, “The Tree of Hope”  at the United Nations in New York, during the UN Children’s Summit. The book tells the story of young people taking actions to mitigate climate change and Kehkashan received a Gold Award from “Voices of Generations” for this book. Her blogs have been published by the Huffington Post, UNICEF and many other portals.

Kehkashan is the youngest member of Canada’s Women in Renewable Energy as well as the Middle East Solar Industry Association which is the region’s largest association of professionals, activists associated with the solar energy industry which is seeking to popularise its usage as an alternate to the fossil fuel industry. She also launched KidsRights “Push! For the Environment Campaign” at the Ziggo Dome arena in Amsterdam during the Young Impact celebrations, reaching out to over 10,000 youth. Green Hope’s work featured in former US Vice-President A Gore’s 24Hours of Reality global broadcast of 2017 which engaged half a billion viewers worldwide.

2019 Community Award for Youth Service: Awarded by the Committee of Youth Officers for the Province of Ontario for outstanding youth service.

2019 Innovator of the Year: Awarded at HundrEd Innovation Summit in Helsinki on 8th Nov 2018 chosen from the world’s top 100 innovations in Education.

2018 Commonwealth Youth Awards for Excellence in Development Work: one of the five Caribbean & the Americas Region Winners

2014 GOI Foundation Japan and UNESCO award : 2nd prize winner in the 2014 International Essay Contest for Young People from among 13,635 entries from 151 countries. 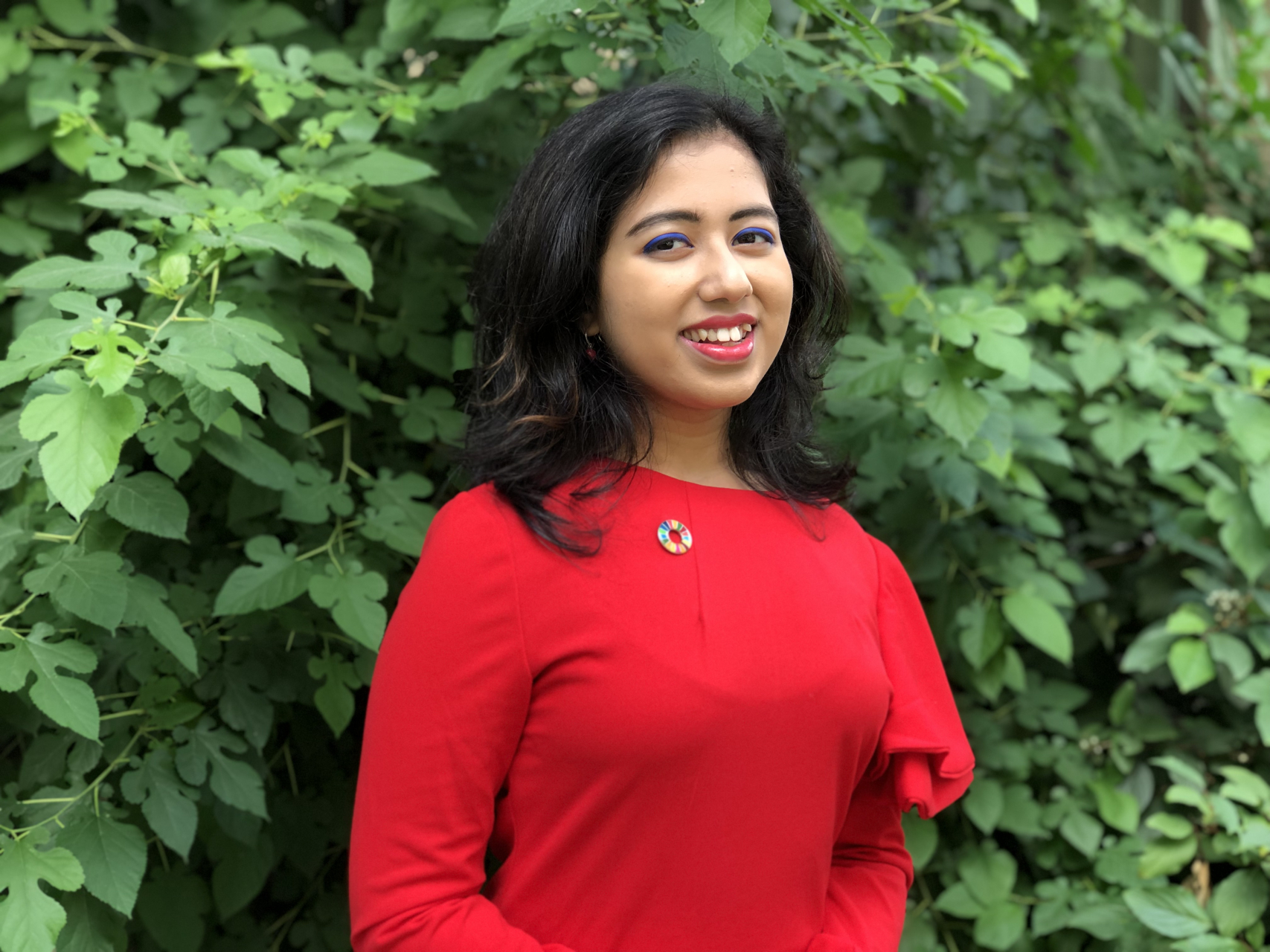